I put an offering and a prayer-filled question into the Sacred Fire. Over the next 24 hours the universe answered me in a series of unexpected waves that hit me like they would an open beach – over and over again. I am certain the universe was also answering every other person, every other question at the same time. The answer was so personal and so universal at the same time that ‘I’ dissolved. 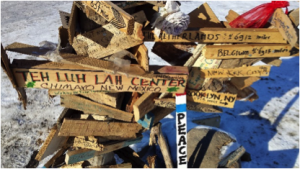 I think anyone walking up to the center of the Universe might shake a bit. I certainly did. The Sacred Fire at Oceti Sakowin prayer camp was the physical manifestation of the beating heart of the Great Spirit. I had no idea how to be present there. I knew there were many important ceremonial rituals that I wanted to honor, but did not yet know more than mere basics: walk in a clockwise manner and do not cross between anyone speaking or in prayer and the fire… I knew you could make sacred offerings to the fire and that your prayers would be answered in some way if you could just let go and stay alert and open to the world around you.

My initial prayer was raw, exposed, clumsy. It was some jumbled concoction of “Why am I here? Do I belong? Is it really ok for a non-native to be in this sacred place? How can I serve? How can I learn?” My heart was pounding. I felt shattered the way one feels near a powerfully enlightened master. Shattered of all illusions. Exposed in Being. Altered. A clay pot returned to dust.

Leaving the fire, I dropped the question and walked into the camp. The first answer came immediately as I found the medical area of the Standing Rock camp. They were in dire need of help setting up a field hospital. It was a horribly enlightening experience of working hard with people I did not know as we organized equipment and supplies in preparation for treating the causalities of non-violent protests. I experienced highly visceral memories of having done this many times before in other lives. The first of many answers came flowing in: I was there to help others – to simply be present and purpose would unfold. And so it began – the simultaneous wonder and heartbreak that was to become the constant experience of being at Standing Rock. I have to tell you that the entire time I was helping to set up that hospital, I was in constant prayer that it would never be needed. I prayed that peace would prevail. Perhaps that was also my purpose, to hold ‘higher ground’ in my consciousness

Later that afternoon I walked back to the Sacred Fire. I was standing there when a Lakota man entered the circle. Coming from my right he walked into the field in such a powerful impassioned way that the people all became riveted. He began to speak in a powerful, fully embodied warrior-voice. Over the next few minutes he answered every question I had placed in the fire as specifically as if he had heard the prayer directly. He never looked at me, but stood about 2-3 feet in front and to the left of me. He left the circle by walking right in front of me. I never knew his name. I still feel his Presence. I am still learning from him and open to learning much more. His power and words were so potent that, while there were only about 15 people by the fire, days after, all around the camp people were talking about it. I will offer a short version of his warrior-voice speech – paraphrased with the intention of being true to the core of his power and message. I feel he was speaking about so much more than Standing Rock. It felt like he was teaching us ways to move forward together – in our personal and group power. It is important to know that the Lakota are matrilineal and perceive the earth and the universe as the Great Mother.

“All who can hear my voice, Listen! This is how we have always done this! Hear my voice and Listen! We all arise from the Great Mother – she is the source and the life of all things. All women are the Divine Mother walking here among us. Hold all women sacred, they are the Goddess in human form. All here came from mother’s womb. There is no other way. Women are always in charge and are the start and creators of all things. You men who think you run your household, think again. The woman is the hub and the center of every breath. They are our sacred center just as the Great mother is the sacred center of all life.

“In this camp we have called the people of all nations and all colors and all countries together! We are all One! There is no difference. We are all relatives. You will look in someone’s face and see a woman or a man or a white one or a yellow one or a black one. But if you cut us, what color do we Bleed?” And we all called back, “Red!” And he said, “We are One nation, One family, One people. All are Relatives. All are One Tribe. All are Welcome. I want to know, who among you are members of my Tribe? Who are my Relatives? Who are the Lakota?” And we all called back “I am. We are.” And he yelled, “A Ho!”

There is one more lovely piece to share. Long story short, I tried to make it through that first zero degree night alone in a light weight tent and failed. In the middle of the night found myself alone in the dark somewhere in the camp with my sleeping bag wrapped around me looking for a place to get warm. I was definitely in a pickle, but you learn about yourself in those moments. While I was scared and cold, I kept hearing myself ask people who came by if they were okay – making sure everyone was safe. I think a woman heard me doing this. She came up to me and kept saying “Hello. Hello. Do you have a warm place to sleep?” When I said no, she simply said, “Follow me.” She took me weaving through the teepees and tents to her shelter. She pointed to the floor and put several blankets on me. It was pitch black. I never saw her face or knew any of the people who had slept there or who the family was… Waking in the morning I realized she was gone and the other sleeping bags were empty. In the dim light I became aware of clothes hanging on a wire stretched across the structure. Amazingly, a pair of snow pants I had donated just the day before were on that drying line – right above my head. Out of all the people in the camp, all the teepees and possibilities, I was being sheltered by a person who had been sheltered by those clothes. At that moment of astonishment, I laughed and relaxed. It was pure magic. The universe was telling me to fully release any doubts. I was not only welcome, I was and am part of the great circle. I am one of the Relatives. We are all Family. Later that day I put 3 apples in a bag and hung them on the canvas flap leading into their shelter. We never even saw each other. It was perfect. A Ho!