As we smiled and opened the door to the hotel for him, the police officer looked stunned. Disarmed by our kindness he began shaking his head as if to knock odd thoughts off of his hair. He thanked us before walking away with his shoulders slumped over. I’m certain he was experiencing confusion, and perhaps a sense of needing to re-write his view of the world. And that would be good… 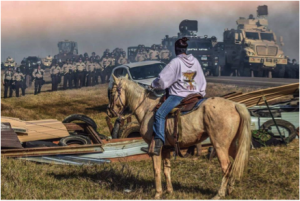 About a month prior to this event my son was helping to winterize structures at Standing Rock. An incredibly gentle, thoughtful, and caring person, Alex is a meditator, musician and healer. He went to the reservation to stand with the indigenous nations and so many others gathered in non-violent protest of the Dakota Access Pipeline. There is a great deal written about this, so I will not enter into the political or even environmental issues in this blog except to say that this was and is a group of world citizens united in deeply powerful spiritual protection of the earth.

As evening darkened on what they now call Black Water Sunday, Alex and a group of others were called to participate in a non-violent action with otherWater Protectors at the bridge where members of the pipeline’s private militia, North Dakota police and the National Guard were blocking highway ____. The protesters were unarmed. Many, including my son, were simply standing in prayer or meditation across the river from the troops. Yet, as we all know, it became a humanitarian nightmare. Alex relates that he and others would walk up to the front of the thousands of protesters to merely stand in prayer. They would be hit with rubber bullets, tear gas, concussion grenades and sprayed with freezing water piped from the river through a water cannon. The people behind them would then haul away the injured and take them to medics and a stream of ambulances waiting to take people to hospitals. Then the next wave of non-violent protesters would then move forward. Constantly this same thing happened for more than 5 hours, long into the night when most of the people actually were covered in saturated, frozen clothing. Alex was tear-gassed 8 times, hit with a concussion grenade and his clothing was saturated with frozen ice. His hands were black, presumably from something in the water.

He constantly felt to move back to the front because of the beauty and power of the native Elders (those 65 years and older) who would come forward in prayer, asking those across the water to simply come talk, join the tribes for dinner, feel welcomed by the People. They would then be attacked and end up writhing on the ground, in utter agony, many peeing themselves on the frozen ground. Alex helped to rescue several people including one man who was bleeding and unconscious with a head injury. The reality of the worst that happened at Standing Rock never reached the news. And much of the best of what happened there never reached the news. 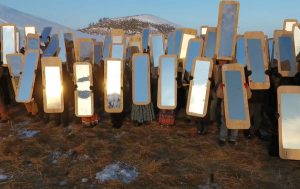 One story of hope shared by the Elders was that some of the Water Protectors carried large mirrors to the front of the action that night so that the police, private militia and National Guard were forced to watch themselves commit these acts. It was highly effective in touching hearts. Seven members of the police force dropped their weapons and walked away from the action. Of those, three left their jobs and careers with the police force. Of those three, two came to live with and support the protestors. Seeing yourself is powerful! We can use that image moving forward. To mirror is powerful. It helps people see their inner world in a new way. It opens an opportunity to choose to shift in a positive direction.

Not only was the oil company armed to the teeth on the ground, it also had several planes and a helicopter that would continually buzz the ‘no-fly zone’ above the Standing Rock camps at least every hour, presumably to create fear and to keep an eye on the situation. They were also jamming phone and computer signals, blocking content and raiding people’s personal devices in order to control the news of what was really happening from getting out of camp. They used any pictures, names or information gleaned to create profiles and frame people in the camp for legal prosecution. I am not exaggerating. In fact, I am being really restrained in reporting what was going on there. There were also infiltrators in the camp, but that is another story entirely…

The thing I want to share is one way to meet such a vile example of inhumanity while holding our center, our certainty and our dignity. That is exactly what the Elders and Shamans were doing. They were stunning examples of human dignity and power and heart-centeredness in the midst of dangerous opposition. They never even glanced at the planes or helicopter or guns. They never spoke badly of the people fighting for the pipeline. Instead they upheld the sanctity of every person in the circle, regardless of the role they played. The Elders just lived and prayed and celebrated and resisted by maintaining truth of their connection to each other and the earth. They were not in any moment that I witnessed cowed by the situation.

In fact, Elders went even further modeling how to move forward by showing concern and kindness to the people across the bridge. When the blizzards began to hit it was incredibly intense with temperatures way below zero and formidable, unrelenting winds. The Elders responded by creating care packages for the police and military troops to help them to stay warm in the storms. These were walked across the bridge and handed to the freezing police.

I decided to leave camp after the second major storm. Alex drove me up to Bismarck, and we spent a rather amazing night in a hotel. The entire place was full of the National Guard and police who had been guarding the bridge. We could not become invisible. It was clear we were coming straight out of Standing Rock. The distinctive and penetrating smell of smoke and smudge saturating our clothes alone enough to tell the story! And then there were the clothes themselves. We each had on about 5 bulky layers of long underwear, pants and fleece under ski pants and jackets. I had on 2 neck warmers and 3 winter ski hats. And then there was this giant maternity skirt over it all to show respect for tribal customs. We were also carrying camping gear and huge 5 gallon jugs full of frozen water. In other words, we were not your average tourist needing a room for the night!

Alex and I just grinned at each other and started radiating kindness and respect to everyone. They might have been the same people who fired grenades and rubber bullets and grenades and freezing water at him just weeks before. It did not matter. Kindness and laughter and shared humanity were the order of the day. Seeing these people move from being startled to beginning to smile back and engage us was incredible. The heart-mirror, the smile, the respectfully opened door, in the end can create changing perceptions of ourselves and others. It felt like hard places in all of us softening and opening. While it may not change the system immediately, ultimately kindness changes people and people change the world. We each hold far more power than any gun simply in this truth of our inner nature. And we all hold the capacity to be Present and Kind. It can change the world. A Ho.

Read next: Water Birth at Dawn