How to maintain personal integrity in the whole?

I’ve been struggling with holding my center and with picking up stray energy from the world.  Recently, during an intuitive session, I asked a simple question: “Why do I become un-centered so easily in the world?” The answer blew me away.  All that is shared here was not ‘seen’ by the eyes, instead the sense of “I” became these forms and different views of the reality of our embodiments.  It was a download of truth about consciousness and form that could have come straight from a physics class.  All arising from the most basic questions of how to maintain personal integrity in the whole.

Question: “Why does my field keep getting frayed in the world?” 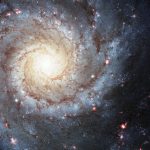 As this question arises, I ‘see/become’ a swirling disk of light – like a galaxy, spinning around a center.  It is vast, and all things are included in it.

The disk of swirling light begins to move into a funnel shape, not un-like a hurricane, only there is one funnel going ‘up’ and another going ‘down’ – a sort of mirroring with a still ‘eye’ in the center. 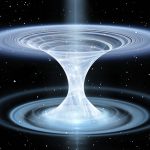 The sense of “I” is in the middle, where the two mirrored funnels arise – as if the ‘I Am’ is suspended in the donut hole of space in the center.  There is deep knowing that the still center is the absolute, emptiness of creation/being and the flowing mass of the swirling disk and funnels is the dual ‘stuff-ness’ of the form-world

I am shown that if I remain still, centered in vertical alignment, that my sense of the singularity of ‘self’ remains intact.  But if I lean into the stuff of the world, and become entangled or identified with the stuff swirling around in the hurricane forces of duality, the subtle fields (etheric etc.) that surround the embodiment, become frayed.  The sense of identity is eroded, and the embodiment picks up ideas and emotions and all kinds of energies in the hurricane.  There is a definite pull, a sort of sticky magnetism that calls the small self to tilt to the horizontal – to get caught up in the swirling stuff of life.  One can actually become so lost in this way of being that there is little-to-no remaining memory of a singular, still center.

Question: “How to stay centered in the absolute identity? 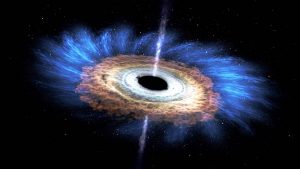 As I ask this next question, a new field opens up, directly above the ‘head’ and beneath the ‘feet’.  This column arises from the point of the absolute ‘self/singularity’ straight through the center of both funnels.  It extends up to the farthest reaches of universal ‘space’ above and the tiniest of ‘quantum realities’ below.  It forms a powerful axis of verticality, of orientation to center.  When aligned with this, there becomes an effortless centering of presence and consciousness.  There is no longer a ‘pull’ of any kind to the side or loss of centered awareness.  (I’m later told that this kind of line of escaping matter does arise from the center of a black hole. It is sometimes called the line or axis of spin.) 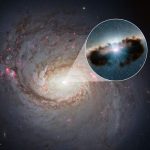 It is interesting that looking above through this ‘column’, one can ‘see’ the entirety of universal forms, and looking below, one can see the entirety of quantum forms.  They are the same.  They are a direct mirror of each other.  No difference. Direct reflection.  I start to understand much that cannot be translated by our language.  One thing that is certain, this embodiment we are experiencing day to day is far more than we know.  There is a very real way that we are ‘living’ as the still center of a worm-hole between space and time and inter-dimensional realities.  I begin to sound like a crazy person, but there you have it.  Whole books could be written about what is seen from this perspective of ‘self’ or ‘self as a singular expression of unified one-ness.’  Black holes are called singularities.  In many ways, in the fields of consciousness, we appear to be singularities too.  Fascinating.

While all of this is captivating and definitely will be in my consciousness for a long time, there is a dryness to what is being seen/experienced.  It feels like a highly mental vision.  Something is missing.  I have a final question.

Question: “What about the heart and devotion?”

I drop into the heart center – the All-Center.  There is an instant ‘explosion’ – a supernova of pure, unbridled love and light – everywhere, all expression becomes only love.

It feels like a Big Bang – both the annihilation of all things, and their birth.  All that was visible/experienced in the vision appears to have been obliterated.  The heart has demolished all previous, limited perception of form as well as the apparent differences between the absolute and the dual worlds.  All of it – the swirling galaxy, the mirrored cone-like hurricanes, the center of the donut hole, the axis-like column of consciousness … all appear to be one thing, with no discernible separation.  Love demolishes illusion.  Heart is a sort of ‘mother’ – a womb showing that all children, consciousness, form, emptiness, and universes … arise from and melt into a pool of oneness.  No differences.  If I look closely, with intention and love, I can still see the forms through the aura of light.  They are still ‘there’, but the perception of the entire thing is utterly new, different, and transcendent.  Fusion.

I want to explore this vision of the heart, for it is the point at the center of all things.  No matter what axis we explore, the heart is the physical and evolutionary center.  In science, metaphysics, and religion, it is the 0-0-0 point.  No matter how many dimensions or directions arise, heart is home.  I want to explore the heart as the iris of the eye, the center of perception.  And I want to explore how this vision relates to the alchemy of mysticism and the Tree of Life, as well as the toroidal nature of all expression.  There is so much to see of who we are …