In the past year my life-long passion for the world of rocks, minerals, and crystals has taken on a new form. I’m combining different crystals and minerals with pure copper wire to create pendants and artistic forms that can emit high frequency energies in support of our bodies and living spaces. This is actually a collaborative venture with the crystal themselves. I am guided intuitively as the crystals and wire show me how they want to express, and indeed, how they want to co-evolve with us. The result has become an on-going adventure at the intersection of intuition, art, creativity, connection with angelic kingdom, nature devas and elementals, and incorporation of the high frequencies of Resonance Alchemy. 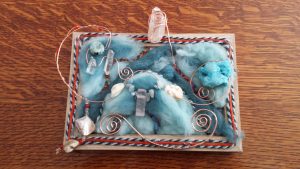 There have been several interesting side roads on this journey that, like many of life’s apparent ‘mistakes,’ have actually taught me a great deal. On one of those side trips, I mistakenly placed a copper spiral on the back of a pendant that was intended to be clockwise for the heart of the person wearing it. At the same time, I placed a heart vibration into the pendant and then ‘fixed’ it to help hold the vibration. All of these actions were intended to be helpful. But looking back, my mind was telling me what to do. As an unfortunate result, the energy did not work for the person wearing the pendant and the polarity of her fields actually reversed. We began to try to figure out what had happened. 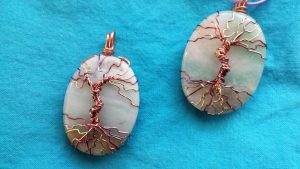 During this exploration, I realized something key and utterly humbling about our expanding awareness as humans. It is time that I (indeed all of us!) come back into the core understanding that everything in the world around us is a conscious being – totally sovereign, connected in the whole, Alive, and Aware. The crystal, especially wrapped in the pure copper and charged with high frequency energies, was and is a totally conscious, independent, sovereign Being. I was not treating this alive One as a Precious consciousness. I was treating her as a “thing.” I needed a radical shift in my thinking and Presence.

I needed to stop being a ‘person working with a rock.’ This was archaic, limited and limiting thinking, even though ‘I’ ‘wanted’ to ‘do’ something positive and ‘make’ it beautiful and helpful. The crystal was far more conscious as a Presence than I had realized. The problem arose because I had been deep in Western Mind – treating this crystal as a ‘thing’ I could impose ‘my’ will on. Instead, I learned that it/she had her own heart and choice and free will. She needed to have the heart spiral in copper wrapped in a clockwise manner for her own heart! And she wanted to choose her own vibrational frequency, not have me impose something. Furthermore, she wanted to be left open to evolve – not have something fixed into her that acted like a jail cell to trap her into vibrating the same way for a long time. She was and is fully conscious.  As soon as these changes were made in a conscious, honoring and grateful way, the pendant became supportive and healing. She began to deeply support the energy fields and consciousness of the person who wears her. Indeed, the two of them began to co-evolve and co-elevate each other’s consciousness.

Each of the Conscious Crystals that are now coming through feel like Tantric (or co-creative) Beings. They form in unions between the crystals, the wire, myself and the chosen frequencies of healing. This process feels a little like being in a womb together where different forms of consciousness join into a creative fusion of physical forms. There are times when I am acutely aware that I am blessed to be present as a sort of midwife during the creation of new expressions of Life.

While all of this may seem like a wild explosion of fancy or imagination gone wild, I assure you it continues to happen. At first I was utterly stunned and hesitated to continue. However, it is obvious that the road is clear and all participants are eager to continue. Each new Conscious Crystal form has an entirely unique feel and function. Often they are entirely aware of who will ‘wear’ them or place them on an altar or in a healing room. The people interacting with them speak of them as powerful, potent, healing, supportive, and evolutionary. Some of the Crystals feel like portals for healing energies, others help our fields to stay clear and aligned, and others feel like they help to stabilize us as we move into expanded states of awareness.

So … while I am not ‘producing’ huge numbers of these new Crystalline Forms, I am open to talking with you about co-creating one as a co-evolutionary presence for you or your space. Just give me a call or drop an email. Many blessings!