In the freezing pre-dawn darkness we gathered at the sacred fire to listen to prayer song and to begin a walk down to the river to make offerings to the water as the sun rose. Every part of the ceremony uplifted and re-birthed us. It was stunning to learn that this is simply a part of every day for the Lakota. They were offering us re-birth on every level we can imagine. 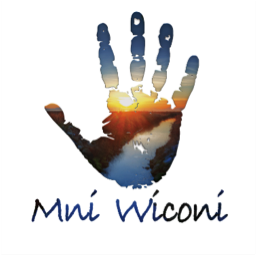 It is breath-takingly cold before dawn in the North Dakota winter. We would gather around the sacred fire, bathed in the power of the prayer songs of the Elders. Hats off in respect, we stood in the timeless cleansing smoke of sage, tobacco and sweetgrass. Young women offered sips of sacred waters gathered from countless holy sites of indigenous Nations around the world. As I sipped, clouds of confused thought simply left my mind, never to return. It was healing on a whole new level from anything I’ve ever experienced before.

And then we would walk together to the river. In the Lakota culture women are considered to be goddess representatives of the Great Mother. As such, the women were protected by lines of men standing around the group. We carried the vessels of the sacred waters and passed them back and forth to share the honor of carrying such a blessing, offering drinks to people in the camp as we passed.

At the river a birthing ceremony began.  Women were given bits of tobacco to offer to river. Men formed a narrow column down the steep bank of the river, just wide enough for one woman at a time to be carefully, lovingly supported as she walked to the water’s edge. At the top of the embankment, the men formed a giant V around the women. The sensation was of being held as a precious one moving from a womb, through a birth canal of gentle, powerful men, to the opening of the great river. Every man reached for each woman in respect and ultimate care, balancing and ensuring her safety. There were few dry eyes in the group. Both the women and the men felt reborn, seen and honored. Grown men were weeping, feeling accepted and powerful. I was far from alone in feeling renewed, reborn, safe, and cherished in ways I never felt before. There were people there from all over the planet. A Russian man who gave up everything to come half way around the world to stand in protection of the planet. People from Europe, Asia, Africa, South America … from every continent and culture staring into each other’s eyes and finding common ground. People from cultures considered ‘backward’ by the forces driving our Western countries were standing quietly in ultimate dignity for the rights of people and the planet. We were singing songs from all around the world. A Buddhist monk pulled me out of the crowd, and as we touched foreheads, he held my hands in a mudra and chanted words I did not recognize with my ears, but that washed my heart and mind in grace. One day, during the start of a freezing blizzard, I handed my gloves to a young man as I bent to offer my prayers, best self and tobacco into the frozen river. As I did, a subtle, powerful energy passed between us – the powerful knowing that I was lovingly entrusting him with my life in the form of gloves I’d need to survive the coming storm. As I stood up and he handed my gloves back, I saw tears in his eyes. I held him and thanked him for his presence among us. He began to shake as he whispered that that was one of the most amazing things that had ever happened to him. We simply have forgotten how to trust at that level. Perhaps we actually need to feel that level of trust for our hearts to unfurl.

I was only one of so many blessed by this daily ceremony. When all the women had passed through the birth ceremony, we then took the men’s places and held them as precious as they went through the same process. All this time the sun was rising and prayers from many nations were offered into the light and the water. It felt both literal and metaphorical. We were birthing a new way to hold ourselves as precious – both as individuals and as a community. I almost cannot write about this. It is still totally altering. I often do this same ceremony at home and especially when I’m blessed to be by a body of water. I never feel alone. We stand together as one.