Sitting in a home-made kayak in the wild ocean channels off the west coast of British Columbia, I was suddenly startled by the whooshing sound of a geyser jetting up about 30 feet into the air from a source just off my boat. Glancing over my shoulder I was stunned. A humpback whale, within feet of the kayak, was surfacing to say hello. Her vast, gentle presence, so close, her wet back rising far above my head left me breathless. Her fins and tail could easily have tipped the boat, but she was cautious, kind, gentle. She was curious. Her energy filled my mind and heart. 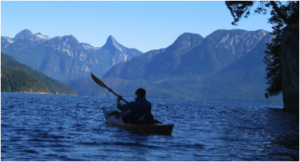 Following a 3-month long project of hand-building a sea-kayak, at last my husband and I were in the ocean, camping on small islands off the north-eastern shore of Vancouver Island. There are many stories to tell of this adventure, but the one I want to share here relates to who we are on the planet. At the core, it’s about blurring the line between what we call the human world, the physical world and the spirit world.

The local First Nations people have lived in harmony with nature in this part of the world for at least 3,000 years. One of the many things they teach is that there is no line between the human world and the spirit world. The evidence of that brought me to my knees and continues to inspire and humble me.

Our entire trip, spirit animals kept showing up in the physical. A deer swimming in the bay around our camp, was always followed by two white cranes. Even my husband, Alan, who claims he is far from mystically inclined, experienced a tiny spirit deer grazing in our camp one night. She appeared to be an adult, but only reached his knee in height. She was completely unconcerned with his presence and movements even though he was within a few feet of her, shining his headlamp on her as she ate.

The main story I want to share is that I awoke before dawn one day and went out to do prayer and meditation on the shore. Somehow, in the midst of the meditation, all barriers between worlds fell away. There was a vast unity of all things, all beings, all consciousness. A grace began to flow that at first revealed a spiral of energy that was turning counter-clockwise in the world. As the grace continued to flow, the spiral slowed, stopped, and finally began to spin in a positive direction. It moved through all things, revealing connections and asserting loving intentions and wisdom as well as deep honor for all manifestation. As I came out of the meditation, the world began revealing many wonders in direct revelation that what I had been blessed to witness did indeed happen.

First a perfectly formed white shell lay at my feet that had not been there before. In the water, a harbor seal was staring at me non-stop as though to ask who I was and what was happening. Directly across a small bay, an animal that appeared to be a cougar was sitting in the seaweed. I was transfixed at first by its stillness. It then began to move around until it finally moved up to head into the forest. Just before it moved out of sight, it seemed to chance into another deer. I still don’t know what I was blessed to witness, but it was definitely a spirit animal who had been linked to the meditation.

Later that day on a long paddle, we saw about 30-40 humpback whales in the area. It was so thrilling that we never dreamed the best was yet to come. When we came back to the camp, two humpbacks were waiting in the bay. They kept coming up within feet of our boats, and swimming just under our kayaks so close that the water lifted under us like the glassy top of a bubble. It felt like a benediction. It felt like pure grace. It felt like a water birth as we were encompassed by the auras of these gentle giants.

Interestingly any time other boats appeared in the area, the whales submerged and did not show themselves until we were once again alone. Then they came back to play! That evening nature had another gift to us to demonstrate the power of our connections to all things/beings. We were treated to the most gorgeous, enduring sunset I’ve ever witnessed. The entire thing was breathtaking, and undeniable.

While we did not witness the events of the next day in that same bay, we did learn from some people who paddled through right after we left, that a pod of about 20 killer whales entered the area and did an incredibly unusual thing. Instead of simply swimming through the area, they stopped and came up to the kayakers and lounged on the surface for about 15 minutes, getting a good look at everyone and hanging out together. Just after that a huge pod of about 1,000 dolphin swam through the bay and on out to the Pacific. Both events were deemed highly unusual by locals.

I wish I could summarize this experience. But I can’t even come close. My entire perception of life and our place in it – who we are, who everyone, everything is – how we are not only connected, but actually One Consciousness, One Expression, has been fundamentally altered. I knew this in theory, had seen it in meditation, but this experience of being immersed in the reality in physical form was an entirely new breakthrough. I feel deeply blessed. Life is so much more than we can imagine.